"How It's Actually Possible To Rank Better Than #1 In Google And Yahoo - Overnight!" 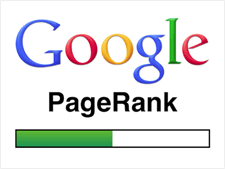 Before I begin, I'd like to tell you the reason I chose "this" specific topic to teach you. I came across a powerful story that I'm going to share with you at the end of this lesson. This story really opened my eyes to what is possible on the web and what all of you should incorporate into your search engine optimization strategy. It's a no brainer and anyone serious about search engine optimization would be a fool not to use what I'm about to teach you. Now, to the topic at hand... If it isn't enough to rank #1 in Google in less than 28 days, I'm going to teach you how you can actually rank better than #1 in both Google AND Yahoo, overnight! Yeah, I can hear you now... That's impossible. What a ridiculously hypish statement. Rodney's completely out of his mind. While #3 might be true :-) you truly can rank above the #1 position in Google and Yahoo in less than 24 hours!

Take a look at the screenshot below to see what I'm referring to: 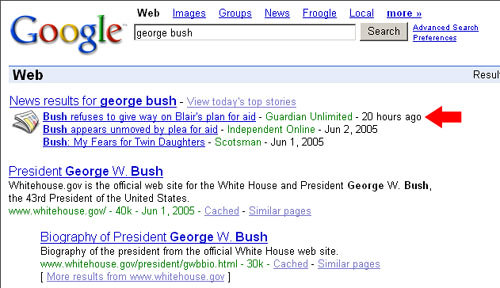 How do those sites get listed in those locations? I mean, you can see the top website was created less than 20 hours ago!

Let me tell you about a little known strategy for:

The technique is called writing Press Releases. Press Releases have been around for a very long time. They're more popular and effective in the offline world... But are extremely powerful in the online world as well, although MUCH less known.

I seriously suggest you learn how to write effective Press Releases before people finally catch on and it loses its power.

So, what is a Press Release anyway?

Note: The definition of a Press Release is quite simple. It is an announcement of an event, performance, or other "newsworthy" topic that is issued to the press.

So how in the world are we supposed to write some "newsworthy" article and issue it to "the press"? I mean, what is "the press" anyway? That's not important for now... Just focus on writing an article that you think people, in general, would want to know about...

If you're going to take the time to write an article(PR) then you should make sure you've written it using the correct format. Below you'll find a sample template of how to properly write a Press Release to ensure that "the press" will at least read your article(PR). 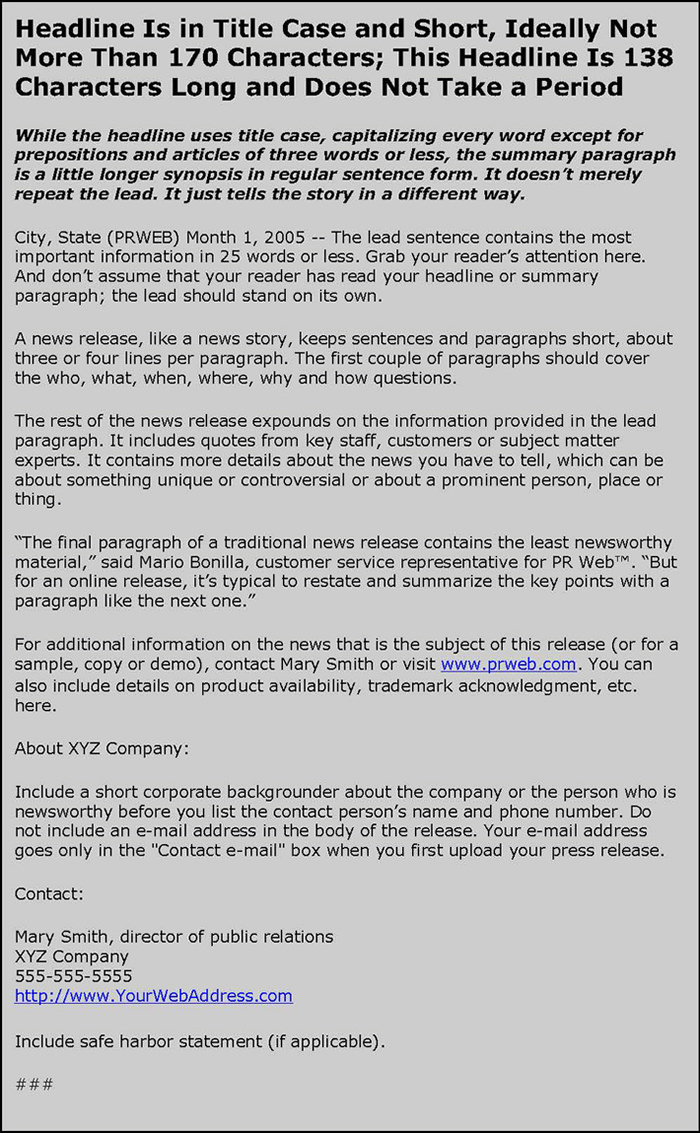 Once you know the proper format, you'll need to be sure you keep the following in mind while writing your article(PR).

• Start strong. Your headline and first paragraph should tell the story. The rest of your press release should provide the detail. You have a matter of seconds to grab your reader's attention. Do not blow it with a weak opening.

• Stick to the facts. Tell the truth. Avoid fluff, embellishments and exaggerations. If you feel that your press release contains embellishments perhaps it would be a good idea to set your press release aside until you have more exciting news to share. Journalists are naturally skeptical. If your story sounds too good to be true, you are probably hurting your own credibility. Even if it is true, you may want to tone it down a bit.

• Pick an angle. Try to make your press release timely. Tie your news to current events or social issues if possible. Make sure that your story has a good hook.

• Use active, not passive, voice. Verbs in the active voice bring your press release to life. Rather than writing "entered into a partnership" use "partnered" instead. Do not be afraid to use strong verbs as well. For example, "The committee exhibited severe hostility over the incident." reads better if changed to "The committee was enraged over the incident." Writing in this manner helps guarantee that your press release will be read.

• Economics of words. Use only enough words to tell your story. Avoid using unnecessary adjectives, flowery language, or redundant expressions such as "added bonus" or "first time ever". If you can tell your story with fewer words, do it. Wordiness distracts from your story. Keep it concise. Make each word count.

2 days ago I came across an amazing story about a guy that moved to the top of Google and Yahoo, above the #1 position... in less than 24 hours, with very little work involved. Not only that, but the keyword he was ranking for, was THE most searched keyword phrase in the world!

Talk about some serious traffic that would bring your website...

So what was this keyword phrase?

George Bush! Yes, that's right, within 24 hours, this guy moved to the top of Yahoo and Google for the keyword "George Bush"... AND this was during the United States elections!

What did he write about? Well, during the elections, www.georgewbush.com was using a form of search engine optimization called "cloaking". Cloaking enabled their website to ONLY be viewable by those people living in the United States.

Problem: The problem was that any American that was studying abroad or simply living oversees would not be able to view George Bush's website. This could pose a VERY big problem. So, what did this guy do? Well, he created a website:

This website was an exact replica of the real George Bush website (www.georgewbush.com), only it was accessible to everyone, including those living outside of the United States.

It was now time for him to advertise this website to let people know what problem he had solved. What better way than to write a Press Release?

What came out of this Press Release that took him less than 30 minutes of work to write and distribute?

A greater than #1 listing in Google AND Yahoo!

It also got onto the first page in Google and Yahoo news websites. (They are the #1 and #2 most visited news resources out there (beating CNN, The BBC and others) receiving obscene traffic every minute of every day. When you searched for "George Bush" at either Yahoo or Google the press release was there at #5. When you searched for "George Bush Website" it jumped to #1.

• The interest that the story generated led to many phone calls from journalists, some from politicians and some from prospective partners.

• Radio Interviews and various print media that called cannot be measured yet, but at the very least it should increase brand awareness.

• Links from the approximately 30,000 pages (including multiple PR7 inbounds and 2 PR8s) . This alonge would give you a #1 ranking for just about any keyword!

What's the moral of the story?

Now, the advanced strategies that this guy (Jason) used, I couldn't even begin to go into here. These strategies are what actually separated his Press Release from the thousands of others that may have written about the exact same topic.

Until next time, happy optimizing!

Do you need help writing a press release or getting POWERFUL backlinks to your website?

The Perfect SEO Article
SEO Tips
How to use Joomla Versions Tool in Joomla 3.2
SEO Article Preparation
How to deal with a narcissistic client
Why most Joomla Developers fail developing Joomla Websites
Did you start a new small business and need a website?
How to update your Joomla 1.5, 1.6, and 1.7 website to Joomla 2.5 and 3.x
How to protect your Joomla Website from Hacking and Viruses
Google not indexing your company name? Do you get "Did You Mean"
SEO Strategy for Google Indexing Description Tag Problem
Drive Traffic Now - Free Report
Google SEO - Starter SEO Guide - Let Google Optimize your site
Why do YOU need to Blog?
How to increase your page rank, site visibility and be viral marketed all at the same time?
How do I find the right keywords for my website or web page
How to Create Quick Landing Pages that Drive Traffic
Never piss off a Search Engine Optimization Specialist