Google not indexing your company name? Do you get "Did You Mean"

Here is an example: 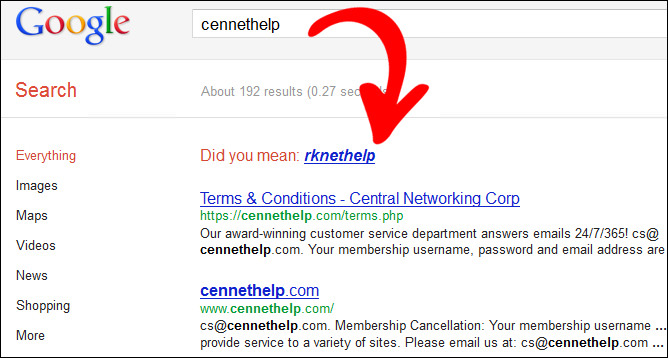 Recently, we were asked why Googles "Did You Mean" showed a different result for a company name when they Google their company name. With a little research this is what we found out.

Google uses spell checking software to check queries, ie (cennethelp) against common spellings of each word. When Google determines an alternative query that they think might improve the search results, you'll see "Did you mean: (more common spelling)" at the top of your search results page. This happens when a site has no relevance, no direct entries into Google and no dictionary reference for that specific word and not enough backlinks to the site.

For example, if you search for [ foot ball ], at the top of the search results page, you'll see "Did you mean: football," a more common spelling of the game's name. Please note that Googles spell check feature is completely automated, and Google cannot make manual changes to individual queries.

Another prime example is when we launched The Turn Group website. Within a few weeks and months, any time you Googled, "The Turn Group" Google asked us if we meant "Turn Group". This is because our site was new, no relevance, no back links and nobody specifically Googling "The Turn Group". It took almost a year for that to go away. This is because; The "did you mean" automated correction script is so resource-intensive that they can only run it five times a year. It took us awhile to get relevant backlinks, user driven traffic, and organic searches for Google to index, The Turn Group" even though before, it still brought up our site.

Basically, the word (cennethelp) is not relevant yet. There is not enough organic hits to that exact spelling so Google thinks it’s a misspell and brings up a more realistic and more relevant searched term result. The "Did you mean: rknethelp" is the next closest word to cennethelp that Google has indexed. Because cennethelp is not relevant as of yet, is not a dictionary word, all Google can do is pull up the next near spelled word that has actual relevance and is somewhat close to the spelling.

Conclusion:
What is happening is when you enter "cennethelp" Google does not recognize this search term. So it does two things. First, it finds a search term that would be the closest match to either the word or spelling of the word; and two, it reviews the word it's going to return to match similar content of the word you were originally searching for. So in this case, though there is no relation between cennethelp and rknethelp, the two commonalities that Google sees is the spelling of the word and the similar content on both sites. The similar content that Google is seeing that is relevant to both sites are keywords such as Chargeback's, Credit Card, Membership, Customer Support etc. So, Google just thinks that you misspelled your original word and asks if rknethelp (the next logical choice based on spelling and similiar content) is what you were looking for. This does not mean either site has any relationship to each other at all. It's just an algorithmic closeness. Spelling + site content equals the returned result "rknethelp"...

The Perfect SEO Article
SEO Tips
How to use Joomla Versions Tool in Joomla 3.2
SEO Article Preparation
How to deal with a narcissistic client
Why most Joomla Developers fail developing Joomla Websites
Did you start a new small business and need a website?
How to update your Joomla 1.5, 1.6, and 1.7 website to Joomla 2.5 and 3.x
How to protect your Joomla Website from Hacking and Viruses
Google not indexing your company name? Do you get "Did You Mean"
SEO Strategy for Google Indexing Description Tag Problem
Drive Traffic Now - Free Report
Google SEO - Starter SEO Guide - Let Google Optimize your site
Why do YOU need to Blog?
How to increase your page rank, site visibility and be viral marketed all at the same time?
How do I find the right keywords for my website or web page
How to Create Quick Landing Pages that Drive Traffic
Never piss off a Search Engine Optimization Specialist